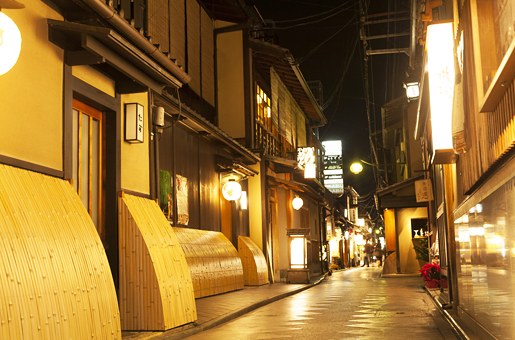 Pontocho, counted among the five Kyoto Hanamachi districts, is a narrow street that runs along the north/south side of the Kamogawa river, from South Sanjo street up to Shijo street. It was originally a part of the Kamogawa river, but it was landfilled in 1670 as a part of levee protection construction for the Kamogawa and the Takasegawa rivers, and originated as being a part of the city streets. There are various theories as to the origin of the name, such as being derived from the Portuguese for “leading” (ponta), “bridge” (ponte), or “point” (ponto), as well as being reminiscent of a drum as its sandwiched between the Kamogawa and Takasegawa rivers, so “pon” being the sound that a drum makes.
The first teahouses appeared in 1712. They began as travelers’ inns for the crew of flatboats, ferrymen, and travelers that had women serving tea in them, but it’s said that they gained an official license to handle geisha in 1813. In the Hanamachi you can find the places where geisha and maiko go about their daily life, teahouses with banquet seats for enjoying dance and songs, and schools where traditional performing arts are practiced. The school is descended from the Nyokoba, a school that was established during the early Meiji Period to teach women how to sew and weave. At the time it hosted not only geisha and maiko, but also taught general education to the women living in the Hanamachi as well.